Wallace is from Greenwood, MS., and has a wealth of experience at MVSU. She previously served as the executive assistant to the president.

"I am thrilled to have the opportunity to continue to work with Mrs. Wallace as she moves into this new role. I am confident in her ability to serve the University as she has for over 20-years in various capacities," said Dr. Briggs.

"Her advice, counsel, and support of our university initiatives that further MVSU's mission and goals are vital. She will be a significant resource to the Executive Cabinet in helping with the faculty, staff, and overall student development," Briggs added. 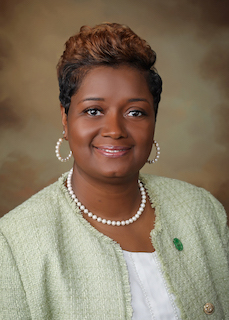 "It is a privilege to have the opportunity to serve the University in this position. I want to thank President Briggs for putting his trust in me. I look forward to my continued work with the rest of the executive cabinet members. Indeed, I am thoroughly honored and excited to start my new role, and I feel like my entire career at MVSU has been a journey that has led me directly to this position as Chief of Staff," said Wallace.

Wallace began working at MVSU in December of 2000 as a secretary in the teacher education department. She later served as the administrative secretary to the dean in the same department. From July 2007 until June 2015, Wallace worked in the Office of business and finance as an office manager and the resource/property coordinator before becoming the executive assistant to the president in July 2015.

In her new role, Wallace will be responsible for reviewing and directing incoming documents to the president's Office, draft talking points, speeches, and other confidential and executive correspondence on behalf of the president. In addition, Wallace will maintain responsibility as a lead university administrator responsible for working directly with the Mississippi Institutions of Higher Learning attorneys regarding university legal matters, responding to internal and external requests for information on behalf of the president, advising the president on issues of immediate and long-range concern and serve as the contracts manager for the University.

Wallace is married to Rodrick Wallace, and they have one son, Avery, and two daughters, Dakiyah and Leah. She is a member of the Kappa Alpha Omega Chapter of Alpha Kappa Alpha Sorority, Inc.