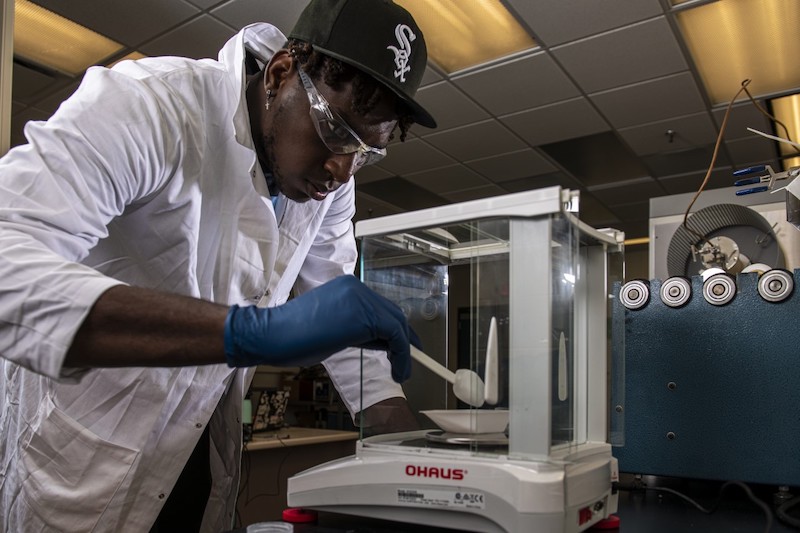 Mississippi Valley State University’s (MVSU) Daniel Umoh, a sophomore Engineering Technology major from Lagos, Nigeria, joined 19 other students from historically Black colleges and universities (HBCUs) who participated in a summer program at Missouri University of Science and Technology that was designed to encourage engineering students from underrepresented groups to pursue graduate studies.

Umoh applied for the Missouri S&T’s Summer Engineering Research Academy program after being informed by his brother, who attended it the last summer. After being accepted into the program, Umoh was supervised by Dr. David Lipke and mentored by a graduate student named Grace Basler, both of whom he worked with to create the design of a heat exchanger.

Umoh felt the program was his opportunity to gain hands-on learning in Engineering Technology.

“What I wanted was to see different kinds of engineering, and the program’s focus was under my major at Valley. Under Engineering Technology, we use CAD (Computer-Aid Design). I was not introduced to CAD yet because I was only a freshman,” said Umoh.

While matriculating during the summer, Umoh quickly learned that his time would be dedicated entirely to the program. In addition, after the six-week program, Umoh felt more prepared and knowledgeable about CAD and Engineering Technology.

Now in its fourth year, the two-month program involves the students in a range of research projects, including testing bridge-girder strength, analyzing lunar plasma to allow humans to live on the moon, and studying plants’ role in cleaning pollutants from soil and water.

“The SERA program gives students an opportunity to understand the research and capabilities we have at Missouri S&T and what opportunities graduate school could provide for them,” says Dr. Phillip Mulligan, assistant teaching professor of mechanical and aerospace engineering and SERA director. “They use the knowledge they gained from their current institutions and develop a deeper understanding in their fields.”

Mulligan says the SERA program provides students not only with research experiences but also with networking, team building, and personal and professional development. While they attend SERA, the students live in a residence hall on campus and meet for weekly workshops that provide additional learning opportunities.

The SERA program allows Missouri S&T to further build bonds with participating HBCUs and collaborate with the schools to continue research when the students return to their home campuses.