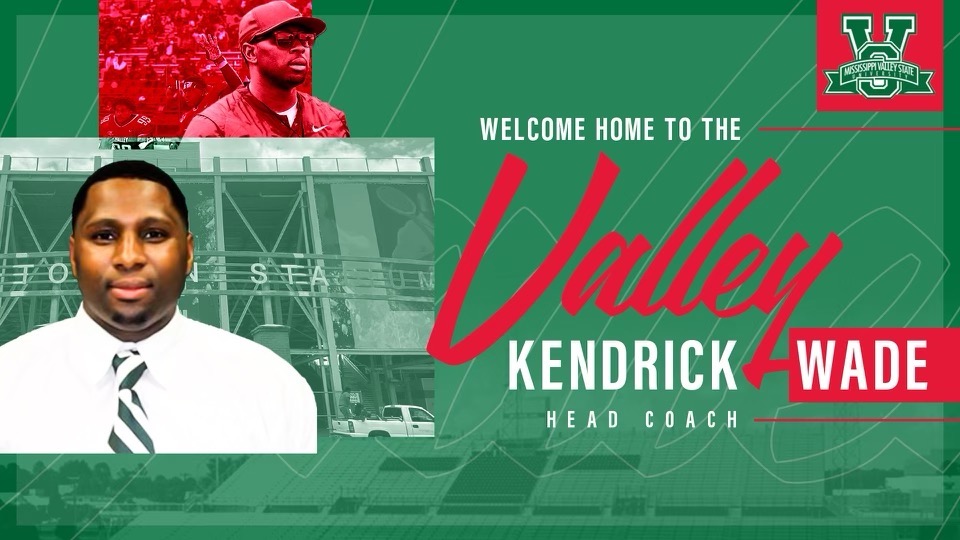 Wade is no stranger to MVSU, being a two-time graduate, star football player, and coach for the Delta Devils. He makes his way back to his alma mater after seven years of head coaching experience on the high school and middle school level, followed by six years as an assistant coach on the collegiate level.

"We were looking for a leader with a vision who could draw people into the program and towards him. Coach Wade has been working hard and paying his dues in the high school and college coaching ranks. He has demonstrated proven success as an assistant coach and what he has accomplished working with players over the years, and we believe he will do the same coming back home to The Valley," said McClellan.

Wade, a two-time MVSU graduate (Masters of Science in Sports Administration 2018) and (Bachelor of Science in Health, Physical Education, and Recreation 2007), always believed that this day would come.

"I have dreamed of this moment; I saw it before it became a reality. I always felt I would have the honor of returning home to elevate this program to compete for championships, and that's what we are going to do. I know it will not happen overnight, but the "Process" of that elevation begins now. Valley, THE TIME IS NOW," said Wade.

During his playing days at MVSU, Wade was named Most Outstanding wide receiver in 2004 and broke the school record for the longest receiving touchdown in school history (82 yards vs. Grambling). In 2016, Wade was named to MVSU's All-Decade Football Team (2000-2010).

Before joining the Delta Devil football team, Wade was a standout performer in baseball and football at Coahoma Community College in Clarksdale, Miss. As a sophomore, Wade was named CCC's Most Valuable Player (football) and was selected to play in the Junior College All-Star game.

After completing his playing days at MVSU, Wade played four years of Arena football in Texas and Arkansas.

In the collegiate arena, Wade is widely regarded as one of the elite wide receiver coaches in the nation and is known as an exceptional recruiter and a great motivator.

Wade is coming from Delta State University in Cleveland, Miss., where he was the wide receivers coach. His addition to the Statesmen's staff produced immediate results, as the offense was one of the most explosive offenses in the nation. DSU averaged 41.2 (PPG), 471.8 (YPG), and a National Division 2 playoff berth. Delta State finished the 2022 season with an 11-2 record and Gulf South Conference (GSC) Champions.

Coach Wade helped develop one of the top wide receivers in the GSC in senior Dohnte Myers, who finished the season as the GSC leader in receptions (65), second in receiving yards (877), and third in the GSC with eight receiving touchdowns. Myers was named to the All-Gulf South Conference First Team.

In January 2020, Kendrick Wade joined the Fort Valley State University staff in Fort Valley, Georgia. FVSU Head Coach Maurice Flowers and Kendrick Wade had previously worked together at MVSU in 2018, where Wade was the Wide Receivers Coach, and Flowers served as the Offensive Coordinator/Quarterbacks Coach.

During his two-year stint at Fort Valley, Wade served as the Wildcat's pass game coordinator and wide receivers Coach. While at FVSU, Wade coached All-SIAC wide receiver Shemar Bridges. In 2021, Bridges's senior year was cut short due to an injury; he still signed as an Undrafted Free Agent with the Baltimore Ravens. Bridges remains a member of the Baltimore Ravens football team.

In 2017, Wade returned to his alma mater, Mississippi Valley State University, to coach the wide receivers.

In his first-year coaching at The Valley, Wade helped groom wide receiver Quinn McElfresh, into an explosive "Playmaker" and the Southwestern Athletic Conference-leading wide receiver in receptions per game and second in receiving yards per contest. McElfresh was named SWAC Newcomer of the Year and earned All-SWAC second Team Wide Receiver honors for his breakout season.

Wade will be introduced at a press conference at 11 a.m. Monday, January 9, 2023, at the MVSU Science and Technology Building in the Mary Crump Auditorium.